Where would you attach the strings? 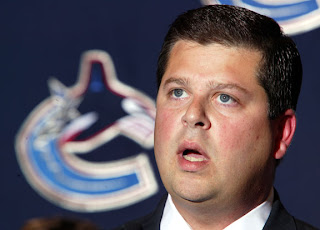 He's pretty shocked by the latest turn of events, if his photo is of any indication.
Unless you've been hiding under a rock, the big news for the Centre of the Universe yesterday was the Maple Laffs firing of coach Paul Maurice. Give the guy a crummy bunch of players to work with, then blame Maurice for the team's failure. Classy. Trust me: Maurice was not part of the problem. Toe Blake couldn't have gotten more out of the one-trick pony that was the 2007-08 Laffs.
Now it's being reported that they've approached the Canucks to ask for permission to speak with recently fired GM Dave Nonis. Nonis would be brought in to handle the Leafs' managing duties through next season. In other words, they'd be replacing interim GM Cliff Fletcher with... another interim puppet.
The reason for the short-term "solution"? Could they be hoping that Nonis would simply be keeping the seat warm for Brian Burke until his contract with the Ducks runs out next year? I hope that Burke re-ups with Anaheim for a long, long time.
On to some real hockey news:
Canada will kick off the qualification round of the 2008 IIHF World Championship against Norway this afternoon after the Norwegians fought back from a 2-0 second-period deficit last night to shock Germany 3-2 and grab second place in Group C. The Canadians have dominated Norway at past world championships, winning 14 of 15 games and outscoring the Scandinavians 96-18. Look for more of the same to continue.
Other results form yesterday:
Today's remaining games: Sweden/Denmark, Switzerland/Czech Republic, and U.S.A./Germany.
And (yawn...) after a few days rest, the NHL playoffs resume in Detroit today where the Dallas Stars meet the Red Wings in Game 1 of the Western Conference Finals. My dog says Wings in six. FYI, my dog is never wrong.
.
.
.
Posted by YOUR RESIDENT BLOGGER