At least Centre Hice will be able to sleep tonight 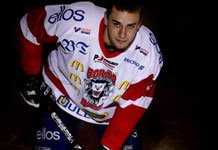 In what might be the most anti-climactic announcement ever (ok, maybe not ever), Swedish phenom Fabian Brunnstrom has apparently chosen Dallas as the team that he will make his NHL debut with next season.
Um... if he's that good, then why was he passed over for the Swedish national team at the World Championships?
Here's the skinny coutresy of tsn.ca.:
The 23 year old Swedish forward officially made his decision on Thursday with Dallas edging out Montreal, Detroit and the Toronto Maple Leafs.
"In the end there was no wrong decision for Fabian," his agent J.P. Barry told The Canadian Press... Brunnstrom chose Dallas based on his belief there a combination of both roster depth and opportunity will exist when he arrives on the scene for training camp."
Brunnstrom will have a two-year entry-level deal signed within the 24 hours and will be paid in a similar fashion to a top 5 draft pick, which could translate into a cap hit of over 2 million dollars per season.
.
.
.
Posted by YOUR RESIDENT BLOGGER