If he knows, he ain't saying much 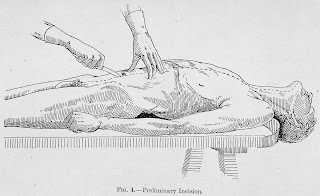 I can't believe that I almost forgot to post this. Then again, I didn't have a decent autopsy drawing before now, either.
GM Bob Gainey and coach Guy Carbonneau gave their post-mortem on the Habs' 2007-08 season in a Bell Centre press conference.
In case you're interested, you can listen to the audio here. Not much new/unexpected info if you've been following the team all season, though a focus on the forwards appears to be the mandate for the offseason.
Speaking of...
That Swedish kid that's supposed to be the next coming of, well, EVERYONE... Brunnstrum... Burnsgum... Barrnstorrming... whatever the hell his name is, has apparently whittled down the choice of teams that he'd like to start his NHL career with to four. And you guessed it, the Habs are one of 'em. The kid was in the Bell Centre last Saturday night to witness the demise of their season, so I guess that we can cross Montreal off the list. Unless, of course, his tour of the city included some of the choicier strip clubs and a side trip to Schwartz's.
Other teams in the running appear to be the Laffs (puke!) Dallas, and Detroit.
Something tells me he's going to me wearing red and white next year.
.
.
.
Posted by YOUR RESIDENT BLOGGER