Moving sucks without the beer 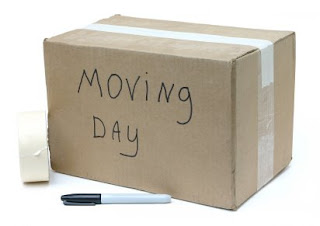 Ok, I'll come right out and say it: moving sucks. Or more specifically, it's the packing before the moving that I don't have a fondness for.

As you go through the pile of crap that you've accumulated since your last move you end up having to ask yourself, "Is this worth spending the time end effort packing, or would it simply be easier cutting the ties and tossing it in the trash?"

Yesterday was moving out day for the 2007-08 version of the Montreal Canadiens. Players packed ther belongings and got ready to leave the Bell Centre for the last time this season. Most will be back next season.

During this off-season, Habs GM Bob Gainey and his staff will have to decide whose getting kicked to the curb. Michael Ryder, Bryan Smolinski, Pratrice Brisebois and Mark Streit are the unrestricted free agent roster players, while Mikhail Grabovski, Andrei Kostitsyn, Ryan O'Byrne, Maxim Lapierre, Joroslav Halak, and Josh Gorges are all restricted free agents.

Considering that he was all but ignored by coach Carbo down the stretch and the playoffs, Ryder seems like a forgone conclusion for a ride on the last garbage truck out of Montreal, and Smolinski might soon follow. Smols had a decent stretch run, but was it worth re-upping for another two million per? Sorry, Bryan. You've been nominated to drive the truck that hauls Ryder's ass out of town.

Favourite fan whipping boy Patrice Brisebois will be interesting. While the popular thought is that he will retire before next season, he proved himself a valuable enough veteran presence on the blue line that fans actually -- gasp! -- demanded his inclusion in the lineup. Should he decide that he'd like one more kick at the can, another one year contract as a depth defenceman for insurance might not be out of the question. A more desirable scenario? The Breezer moves off the ice to coach the upcoming crop of young defensive talent that appears ready to make the leap to become full-time NHL'ers.

Mark Streit seems to be the only real question mark. He was third on the team in scoring with 62 points behind Kovy and the TurtlePlek, and proved himself to be a valuable and flexible asset during the regular season. Defence? No problem? Forward? No problem. Quarterback the powerplay? Got that covered, too. And at $600,000 a tremendous bargain. Unfortunately he disapeared like a magician's bunny during the playoffs, though a back injury no doubt hampered his play. Apparently the Swiss Mister's desire is to remain in Montreal, playing defence, for a while to come. Now all he and Gainey have to do is figure out for how long and for how much. Details, details.

As far as the restricted free agents go, both Andrei Kostitsyn and Josh Gorges had breakout years. Bob should do himself a favour and lock up the D-Cup before the Russian super league comes sniffing around and makes an offer that Andrei can't refuse. Georges started the year a little shaky, but quickly matured as the season progressed. Though not the biggest of blueliners, the kid can skate and can move the puck smartly out of his own zone. I'd take him on the Centre Hice team any day.
Ryan O'Byrne got his first taste of Hab action this year. Look for next season to be his breakout. I'm getting more than a little excited thinking about the twin towers of the Komisaurus and the Rhino crushing those foolish to go wide on them when entering the Habs zone. Sign him for a long, long time.
Will Jaro Halak be back next year? He's got the talent to be a starter in this league, but with Carey Price having staked claim to that position for the next, oh, 20 years or so, Halak seems to have it the glass ceiling in Montreal. If he can't find a starting job in the NHL, he might split for Europe along with Mikhail Grabovski. That said, I just can't see Yann Danis at Price's backup. Cedric Desjardins, anyone?
Anyone?
.
.
.
Posted by YOUR RESIDENT BLOGGER