The first game of the season, with the Habs at the Air Canada Centre in Toronto, something didn't look quite right.
I couldn't put my finger on it, but earlier this week I was looking at some photos from earlier this season, and it struck me: the nets in Toronto's rink looked different.
I searched for archival photos on NHL.com that would show the offending net and a version from a previous year at the A.C.C. from the same angle, then using my world-class Photoshop skills, overlapped the photos to check the result. What was apparent was that the net from this season showed a much larger radius curve in the elbow that connects the crossbar to the posts.
The NHL rulebook outlines that the dimensions of the elbow are to be the same width as the crossbar and post and the curve is to have an outside diameter of 2 3/8 inches. Here's the diagram:
Instead, a net from the A.C.C. this season appears different from a previous version. Here's a photo from a game from this year (against the Panthers) overlapped with one from a couple of years ago, again from the A.C.C., with Carey Price in goal: 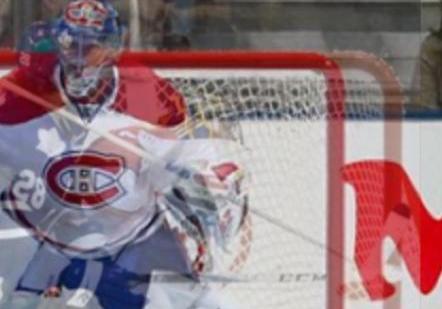 As you can see, the elbow photographed this season (the one on the right) has a much  larger radius to the curve. The net result? a reduced opening between the pipes and crossbar, leaving a smaller area for opposing shooters to aim for, especially if they're trying to snipe the corner. Here's another look, with the two nets directly overlapped. I colour-adjusted his year's version to have a blue tint to make it easier to differentiate the two:
As you can see, the light blue area is the difference in area at which a shooter has to aim. It doesn't seem like much, but for a shot to that corner it could be the difference between a goal and a shot off of the iron.
Of course the Leafs would have to shoot at the same net, but if your team is having trouble scoring goals would it not be easier to find a way to possibly lower the number of goals scored by the visiting team, even if by a small amount?
Instead of a willful skirting of the rules, a simple explanation for the discrepancy could be that the manufacturer of the goals misread the dimensions, or that they used the wrong-sized elbows by mistake during assembly. But whatever the case, the Leafs would be required to inspect all aspects of the playing surface, nets included, to ensure that they adhere to the strict tolerances of league regulations. Surely someone in the organization would know of the change.
The question is, why are the Leafs allowing undersized nets to be used at the A.C.C.?
.
.
.
Posted by YOUR RESIDENT BLOGGER

Email ThisBlogThis!Share to TwitterShare to FacebookShare to Pinterest
Labels: Laffs suck and probably always will