My final Canadiens game at the Forum 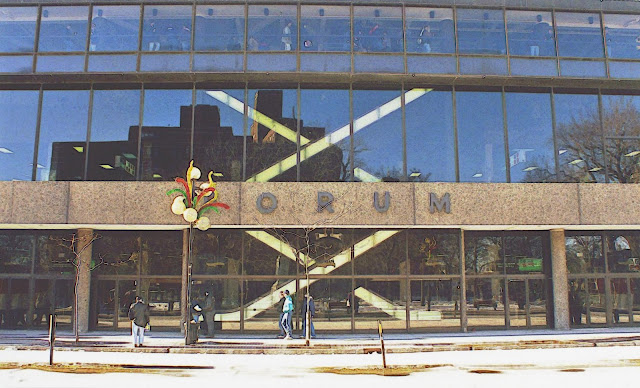 ﻿I will never forget Saturday, November 29, 1980.
It was that night that I walked through the front doors of the world's most famous arena (screw you, Madison Square garden) to take in my final Habs game at the Montreal Forum. It was always a treat to get to visit Montreal, but going to a hockey game was something else. At a much younger age, I had been treated to two games by a friend of my dad who had grown up playing in the same junior leagues and against Maurice Richard—the Flyers and Bruins were visitors those nights—but the circumstances around the third game are what stick in my memory.
At the time, our family simply didn’t have the disposable income to spend on hockey games, so when our group of Cub Scouts and Boy Scouts had the opportunity to pick up discounted group seats from a promotion with the Canadiens, I pleaded with my parents to spring for a ticket for me. As it was, I had to pay for half out of my allowance. I remember my dad mumbling something about learning a lesson in financial responsibility as he forked over the remainder. Three years later and out of work, my dad packed up the family and headed for the other side of Greater Toronto. It would be almost another sixteen years before I got back to the Forum, but that’s another story.
It was a cold and blustery night in Montreal when our bus pulled up alongside the plain, yet imposing building at the corner of Ste. Catherine and Atwater Street and discharged its load of wide-eyed Cub and Boy Scouts that had made the trip to the city from various small towns in the Eastern Townships, east of Montreal. That night the Canadiens were playing the Minnesota North Stars, the team that a season earlier had ended the Habs' quest for a 5th straight Stanley Cup; none of our group had seen a game live at the Forum since then, so that night we were hoping for a victory to fuel our own personal revenge against the team in the ‘snot-green and pee-yellow’ uniforms.
After making our way through the front doors and a ride up those legendary hockey stick escalators, the first order of business of our Cub and Scout leaders was to get us up to section 419 without losing anyone, which considering the wide-eyed wonder of a large number of 10-12 year olds—many of whom who had never seen an NHL game or who had never been to the Forum—was a rather daunting task. Once we were all seated, smaller groups could then be escorted to the concession stands, washrooms, souvenir stands, or head off for a bit of general sightseeing.

Section 419 was about as far away from the action as you could get and still be able to tell your friends that you were 'at the Forum'. As a reference point, there were roughly the same number of rows in the reds and whites as there are in the lower bowl of the Bell Centre; sitting in the Forum blues was similar in height to the Bell Centre's club level. Yet in the intimate confines of that building, the view from that high perch was spectacular. We gazed in wonder at the white ice, glowing under the extra illumination of the TV lights, the row of 22 Stanley Cup banners that were hung down the centre line of the rink, and watched as the seats around us filled up with fans of all description and the players skated through their warm-ups. We were disappointed when it was announced that the great Guy Lafleur would not be in the lineup, and thought the folks in the standing room section below us were the luckiest people in the arena.

We stood, caps off, and saluted our two and three-finger Cub and Scout salutes as the incomparable Roger Doucet boomed through the national anthems. And then… game time!

In hindsight, the game must have been fairly unnteresting; 30 years later it seems strange that I remember so little of the actual game action, considering that’s why we were at the Forum in the first place… though I do remember a scuffle involving Chris Nilan, and our Cub and Scout leaders reminding us that resorting to violence to solve a problem shows a lack of good character. 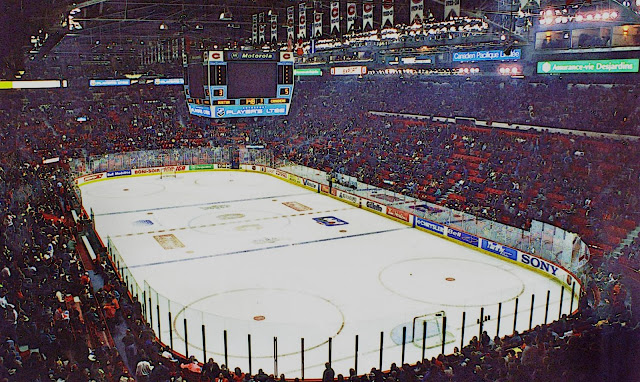 ﻿﻿
After the first period we made our way up to the concession stand to get steamies and Cokes. We should have listened to the adults about loading up on the serviettes, because no sooner than we got back to our seats did my buddy Dean take a bite of his hot dog and drop mustard all over his Scout uniform. I laughed hard enough to have Coke come out my nose. Ouch!

The second intermission was saved for souvenir hunting. Before we got on the bus that afternoon, my mom gave me $20 (she probably didn’t tell my dad) and told me to spend it wisely. In mom-speak, than meant to return home with at least $10 change. I bought a Montreal Canadiens pennant, which I still have packed away in a box somewhere. I also picked up a cool set of Canadiens signature photo postcards. Unfortunately, I no longer have any of those; they were traded over the following period of hockey and the following years for various hockey and baseball cards, most of which ended up not being worth the cardboard on which they were printed.

Sadly, our Habs came out on the short-end of the score, the game ending 4-2. After the final siren we bundled up in our hats and coats, but the Forum ushers allowed us to hang out in our seats until most of the crowd dispersed. They told us that it was to give us a little more time to soak up the Forum atmosphere. In hindsight, it was probably less-difficult to lose a kid by not trying to steer them through the departing crowd. 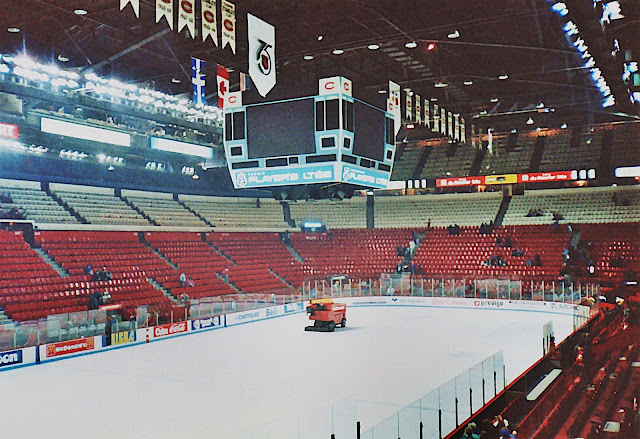 ﻿﻿
After we made our way outside, we noticed that there was a) a lot more snow on the ground, and b) a lot less bus in the spot where we were supposed to meet it. There was, however, a large road coach idling next to the arena. As it turns out, it was also being loaded with Montreal Canadiens equipment bags.

With some time on our hands while a couple of the adults went to hunt down our transportation, we decided to investigate. There was a rather large gentleman in a long grey overcoat standing next to the door of the bus. As it turned out, it was Bob Gainey, who dutifully set about autographing a number of the souvenirs that our group had just purchased. I only remember him uttering one word, “Buffalo”, in response to our questions about where the team was headed to on the bus. Before long he was joined by a REALLY big guy with a shock of curly, reddish hair: Larry Robinson.
I’m not sure what, if any, connection Robinson had with the Boy Scouts, but upon seeing our hats and berets he seemed to take a real interest in us. Or maybe he just felt sorry for a bunch of kids stranded on a cold, snowy street outside of the Forum. Whatever the case, as Gainey continued to sign, Larry disappeared around the bus, only to return moments later with a Canadien puck for each of us. To this day, that puck is one of my favourite Hab-related collectibles. It’s not autographed, but it has Montreal Canadiens class written all over it.

It wasn’t long before our school bus turned the corner onto Atwater Street (it had mistakenly been waiting for us on the other side of the building) and we said our thanks to Gainey and Robinson and piled into its warmth, each of us comparing our the autographs that we’d just received and our haul from the souvenir stands from earlier in the evening.

Soon we were headed back across the Champlain Bridge, all the way home none of us talking about a Hab loss that night. 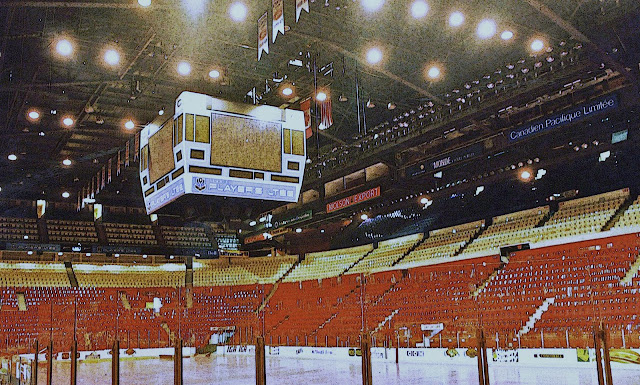 A special thanks to the unknown individual(s) who posted these photos of the Forum online. If one of them is yours, drop me a line so that I can credit you accordingly.
.
.
.
Posted by YOUR RESIDENT BLOGGER