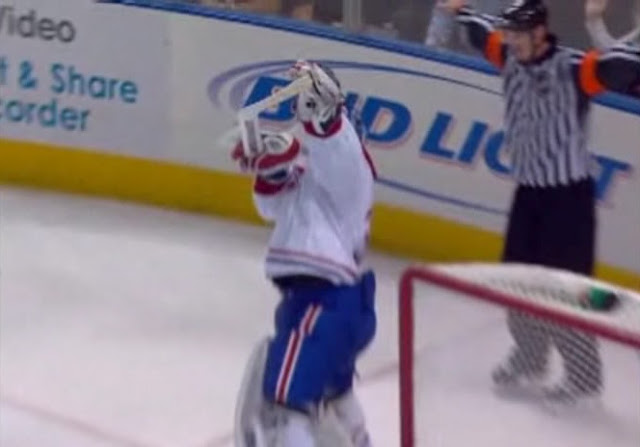 The way that some folks are talking, you'd think that he had given the finger to the Queen.
When Carey Price struck his "Usain Bolt" pose a couple of seasons ago after turning away a Vincent Lecavalier shootout attempt and securing the Canadiens a win, some folks took it as a brash move by a young kid who had yet to win anything of significance in the NHL. While that may be, others saw it as the emerging personality of one of the league's promising young stars; the kind of thing to which the NHL likes to hitch its marketing machine.
Ask Price, and he was merely celebrating a big win.
The Montreal netminder is hardly the first goalie in NHL history to break the mold and strike a pose. He wasn't even the first with the Canadiens. The great Jacques Plante would raise the ire of the opposition when he's raise his arms over his head after a big win. Ken Dryden wouldn't use his pose to celebrate, but his restful leaning on his stick while the action swirled around him was sometimes seen as a slight towards the teams were nightly handled with ease by probably the greatest team ever assembled.
Fast-forward to January 6, 2011. The Habs are facing a team that they eliminated in last season's playoffs, the Pittsburgh Penguins, and the game goes into a shootout. Price stones six shooters to secure the victory, and busts out another pose: 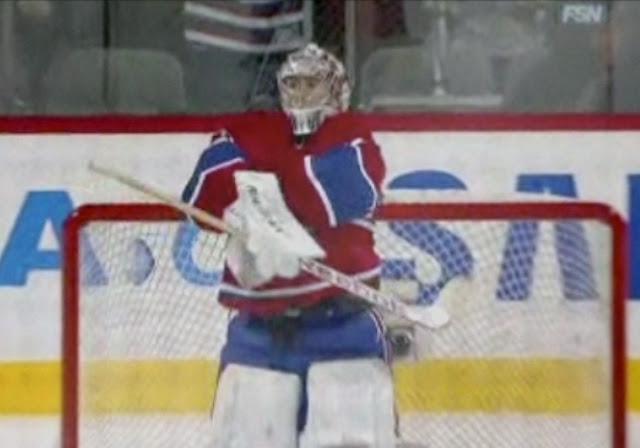 Personally, I'd give more style points to his first one, but the sentiment behind both is the same: big save, big win, let's celebrate. But with last night's loss to those same Penguins, some Hab fans believe that the turning of the tables was brought on by The Pose. This feeling was heightened by Pens goalie Marc-Andre Fleury mocking Price's pose after the final siren had sounded.
Not that Fleury has much to "in your face" about when talking about the Habs; going into the game he was a very ordinary 9-7-1, with a lofty 3.45 GAA and a meager .886 SV%, while the Habs made him look like Swiss Cheese in handing him his golf bag last spring. And he had what could be described as a rather routine night in picking up the win. Not really anything out of the ordinary to get excited about.
There's the difference: Price celebrated. Fleury mocked.
No, surely the loss couldn't have had anything to do with the Habs having given the Penguins eight powerplay attempts which led to four powerplay goals, could it? And of course it was a spur of the moment celebration almost a week previous that cost the team two points in the standings... wasn't it?
Um, no.
Another problem that some people (fans AND players) have with Price's exuberance is that it goes against the grain of their idea of "proper" goalie celebration. A fist pump is seen to be ok. Price "low fiving" with teammate P.K. Subban after a win seems to be acceptable, too. Yet a pose is somehow taken to be over the line and showing off.
But what about the goalie's teammates? Should one of them score an exciting goal, or win a fight, wild celebration is not only accepted, it's often encouraged. The Alexander Ovechkin highlight-reel goal is always followed by a an innovative move or a jump into the glass. Should a goalie then, upon making the final save to seal a win not be afforded the same latitude in celebration without being branded a showoff and becoming "bulletin board material" for the opposing team?
Goalies, I say go for it. You're supposed to be oddballs, anyway. Don't let the extent of your personality be limited to what's painted on your mask. Work up your best celebratory move, and bust it out when the situation warrants. Heck, it could even become an event in the All-Star skills competition.
Now Carey, get to work on rehearsing your next pose. May I suggest the "Hulk Hogan", or maybe a back flip?
.
.
.
Posted by YOUR RESIDENT BLOGGER