A case for Georges Vezina

A quick look up into the rafters of the Bell Centre in Montreal will show that the Montreal Canadiens have retired the numbers of three goaltenders: Jacques Plante (1), Ken Dryden (29) and Patrick Roy (33).
Together, their play represents a span of five decades with the Habs, from the early 1950’s through the mid-1990’s. On the surface, that would lead you to believe that there wasn’t a goalie of incredible stature--one worthy of having his number retired--to have played for the Canadiens before 1952, Plante’s first season. Of course, that wouldn't be true.

As a candidate for number retirement, George Hainsworth should come to mind. Over a seven-year stretch with the Habs, he recorded 81 shutouts and won two Stanley Cups. Or maybe you’d toss your hat into the ring for Bill Durnan, the great ambidextrous goalie who over his seven-year career added another two Stanley Cups for the Habs. Both of those men could (and probably should) be honoured, but if you go back even further you come across the name of the man who inspired the trophy that Hainsworth and Durnan would win a combined nine times.

Along with Didier Pitre and Edouard “Newsy” Lalonde, goalie Goerges Vezina was a cornerstone of the early Montreal Canadiens. At a time when the team’s existence from season-to-season was not assured, Vezina was a constant in the lineup, helping to give fans a team identity to which they could relate. 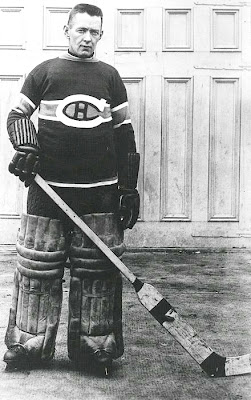 Vezina played in 328 consecutive regular season games (a goaltending record that stood over 30 years), plus 39 more league playoff and Stanley Cup challenge games for a total streak of 367 games spanning 16 seasons. His streak came to an end only when he was unable to answer the bell for the second period of the first game of the 1925-26 season. It was only then that it was discovered that Vezina had been suffering from tuberculosis, the disease that would take his life mere months later. So important had he been to the development of goaltending and to the team that the Canadiens donated a trophy to the NHL that bears his name; from that point onward the league’s best goaltender for each season would be awarded the Vezina Trophy.
Other points to support the retiring of Vezina’s #1:


Only 35 goalies have been inducted to the Hockey Hall of Fame.  Vezina was included in the original induction class of twelve players in 1945, along with fellow Canadien Howie Monrenz, whose number 7 has been retired.
Vezina won two Stanley Cups with Montreal, the same number as Patrick Roy, whose number 33 has been retired.
The Canadiens don't have a policy of "one man, one number"; 12 and 16 have each been retired twice. The same could be done for 1.
A couple of NHL firsts for a goaltender included Vézina being the first to register a shutout, blanking the Toronto Arenas 9-0 on February 18, 1918. Also against the Arenas in December 1918, he became the first goaltender to be credited with a point in an NHL game, an assist on a goal by Newsy Lalonde.
During his career, NHA and NHL seasons ranged from only 16 to 30 games in length, yet Vezina's 328 regular season games put him 5th all-time for the Habs, behind Plante, Roy, Dryden and Durnan.
His 23 playoff and challenge game wins rank him 6th on the Habs all-time postseason win list, even though he only had the privilege of playing in 39 career postseason games. Those 39 games tie him for 5th on the team; only Roy, Dryden, Plante and Durnan having played more. 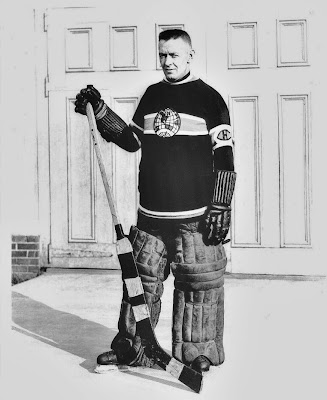 
As it stands, the first four decades of Canadiens history is underrepresented in the list of retired numbers, though era alone shouldn't be a determining factor in if a player should receive the team's highest honour. But if it wasn't for the stellar careers of players like Georges Vezina, the team may not have survived through the 1930's; there's every possibility that there may not have been a CH for the Richards, Beliveau, Plante, Dryden or Roy to wear. For that, I can think of no better reason for the Habs to rightfully raise the Chicoutimi Cucumber's #1 to the rafters.
.
.
.