Bent, but not broken... hopefully

For the Habs, there's only one question to answer tonight: how will they respond after last night's emotional game against the Bruins?
Regardless of the answer, tonight promises to not be an easy game. While still nursing their bruises, they have to come back tonight and face an Islander team that's rested, and quite frankly, has nothing to lose. My guess? It'll take the Habs a bit to get going tonight.
After an eventful evening last night in Boston, Carey Price gets the night off as Alex Auld gets the start. Sadly for the penalty kill, Hal Gill gets the night off to rest a lower-body injury. Ryan White, called up earlier today from the Bulldogs, will be in the lineup.
Of note, The Senators officially pull the plug on the season and deal Mike Fisher to Nashville, who announce the trade as the team picking up "Carrie Underwood's husband". Ouch!
2010-2011 Regular Season, Game 56: New York Islanders at Montreal
FIRST PERIOD:
Well, not a horrible first period, but it still would have been nice to see a little more bounce-back after last night. Still, it would be tough to get up for the Islanders. At least they got their feet wet and came out of the first tied at 1. If they had been trailing... yikes. As it was, the Islanders had the lead in shots 12-9, but the Habs led in faceoffs, 11 to 8.
SECOND PERIOD:
An much more solid period from the Habs against a team that they SHOULD beat, taking the territorial advantage and a 20-10 lead on shots in the second period (29-22 overall). Faceoffs are now even at 21, though the Isles have laid on the body a little more, with a 16-10 lead in that department. To this point, Wisniewski leads the Habs in ice time (18 shifts for 18:43 of ice time).
THIRD PERIOD/Overtime/Shootout:
Well that was... anticlimactic. Habs end up with 40 shots (to the Isles' 33) but can't get the winner past the rookie Koskinen. The also won the faceoff circle, going 52% on the night, but the Isles had a big lead in hits, at 24-14.
_________________________ 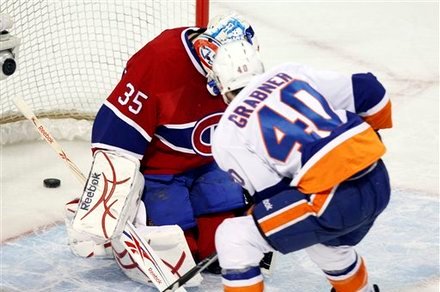 Well, in hindsight, I guess that it could have been worse.
Coming off their most emotionally-charged game of the season, playing a well-rested (although inferior) team that had nothing to lose, the Habs came away with an all-important point for getting to overtime. The Habs were also understaffed, without Price, Gill, Darche, and long-term injuries Markov and Gorges in the lineup.
Still, when you're playing a team like the Islanders that is so far below you in the standings (and icing a rookie goaltender, to boot), it's vital that you find a way to end the night with two points in your back pocket.
The best news of the night is that the Habs best players (Plekanec and Gionta) played like their best players. And Pouliot, Pacioretty and Desharnais are looking like they're keepers, too. Subban? Not his greatest night, though he looked out-of-sorts with his steady defensive partner out of the lineup.
Thankfully, Andrei Kostitsyn looked to be finding his way out of the fog that he had been skating in. Coach Martin rewarded his effort with some late-game shifts, which is a big step up from his 3rd period benching last night in Boston. The Habs need to get this guy back on track; his explosive shot, a potential gamebreaker, is going to waste if they can't get him to find the back of the net with any regularity. A shot in the shootout might have been the confidence boost that AK needs.
Hey, at least the Leafs lost tonight, via the shootout, too. The Habs meet up with them on Saturday night to try to break up their three-game slide.
.
.
.
Posted by YOUR RESIDENT BLOGGER